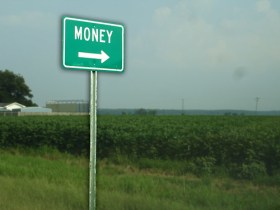 Show me the money! - Photo by: Dave Barger

Far too long since last update. Here’s a quick one just to get back in the game.

Since last I wrote, Coldplay have stirred up some emotions as they refused to license their latest release Mylo Xyloto to streaming music services such as Spotify and rdio. The reason, of course, is the fear that licensing to these services would cannibalise on a la carte downloads, which are substantially more economically viable.

When the results started pouring in a week later, Coldplay had broken the previous digital album sales record. Of the over 200 000 units sold in the UK alone. Over 80 000 of these (or 40%) were digital downloads.

What to make of this? Well, it wouldn’t surprise me if Mylo Xyloto pops up in the streaming services catalogues soon, and if it does, this would make the Coldplay-strategy very similar to how the movie business operates, with releases to the theatres first. In time the movie becomes available on DVD (or Netflix) as the novelty wears off.

This makes perfect sense for any act that has reached such a vast popularity as Coldplay. The value (in dollars and cents) of “reaching out with the music to consumers” via the streaming services’ excellent music discovery and sharing features, is arguably very low for a band with an already established following. Coldplay have put in their time, done their “reaching out” and now they find themselves in a position where they want to reap the benefits of their labours.

Speaking of piracy, Mylo Xyloto is currently number five on TPB’s top downloads list. Would the album have been at the top, had Coldplay licensed the album to streaming services? And what difference would that have made for Coldplay’s bottom line?

2 thoughts on “Coldplay snubs streaming services – what does it mean?”