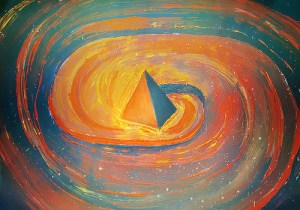 Theories are theories – no more, no less.

Many of the things we hold to be true, and “think” we know are based on either assumptions or at best theories of some sort (which most of the time also rest on the foundation of some assumptions). Theories have the benefit of having to suffer the scrutiny of other people forming theories, and when a better take on things appear old theories are scratched, revised and replaced with new ones. There is an inherent agreement that theories hold true only as long as they are not refuted or a better version comes along. But the agreement also states that theories WILL be refuted. We want them to be refuted. That’s the name of the game. We call it progress.

In some sense we believe in theories the same way we believe in religion, difference being of course that it has turned out to be very difficult to prove the existence of Gods. There’s no science involved in the religion game, although many have tried to combine the two. The results have been unimpressive, if you ask me.

Consider some stuff that you “know” to be true. The Big Bang theory for instance. You can’t really explain it, can you? I know I can’t. But you believe in it, because you were told that this is how the universe was created. Not surprisingly so, since the message you got in school was probably not:

“One widely accepted theory on how the universe began is the theory called Big Bang, a theory that states…”

It was probably more like: “Ok, kids, The universe started with a Big Bang. So there you have it. Now go make crap models of our solar system for no apparent reason whatsoever.”

A quick cut-and-paste from wikipedia reveals this, with regards to the Big Bang theory:

“The Big Bang theory depends on two major assumptions: the universality of physical laws, and the Cosmological Principle. The cosmological principle states that on large scales the Universe is homogeneous and isotropic.”

Did you get that? I know I didn’t. But I found the word “assumptions” in there. So we don’t really know, do we? And more importantly, when you say that the universe began with a Big Bang, and you can’t really explain the theory even on the most basic level, you are really just believing in a message from priests, preaching in a church called science.

This is most likely because you have faith in science, and the process of science, therefore you do not feel any need to understand how they come up with their theories. You accept them. And that’s fine. As long as you remember that they are theories.

This is important because every generation is arrogant enough to believe that they are the ones who finally got it right. In a larger perspective this means that when people believed that the world rested on a giant tortoise, this was accepted as the best available theory, and they laughed heartily at their grandparents who believed with the same certainty that the world rested on the back of a giant squid called Henry.

The above reasoning holds true with regards to just about everything.

And this is why everything you think you know is wrong.

2 thoughts on “Everything you think you know is wrong, part II”