There is no such thing as common sense 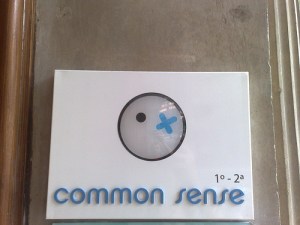 There is nothing common about sense, and sense is not all that common.
In fact, one could argue that “common sense” is to reasoning, what myth is to fact. Let me elaborate.

People tend to believe the strangest things to be facts, even if the facts are simply wrong. These misconceptions resemble urban myths, in the sense that they are often widely spread and “everyone” seems to believe in them. We call these misconceptions factoids, something which becomes accepted as fact, although it may not be true. Such as the belief that if you for some reason find yourself on the Moon orbiting the Earth, you can see the Great Wall of China. Well, you can’t.

The term “Common Sense” is widely in use though, not seldom by people who should know better. Often it’s more a question of rhetoric than an actual reference to something valuable. I’ve always felt that term has something of a “elite” versus “the people” perspective, as “common sense” is based upon knowledge that is supposedly held by people “in common”. Supposedly something we can all just agree upon without much thought, research or analysis. This would imply that “common sense” is somewhat folksy, where as actual sense (which would require thought, research and analysis) is something that brainy people do just to complicate things in order to indulge in blatant self flattery.

“Common Sense” can also be used to describe a reasoning that is “no nonsense”. No nonsense usually mean simplistic, generalized, easy, black and white. And wrong. Why? Because in a highly complex system such as the one we find ourselves in (i.e the world), nothing is that simple. This is the very essence of the problem with “Common Sense”. It is an outspoken adversary to deeper understanding. It simplifies towards stupidity, and with its promise to make complicated things easy, it grasps the minds of people. What we love, we hang on to. And so “Common Sense” dies very hard.

To conclude: The term “Common Sense” in itself is so meaningless that anyone who tries to argue a point with reference to “Common Sense” should receive an ear tug and be sent to bed without dessert. We should listen to Einstein who is reported to have said: “Common Sense is nothing but a collection of misconceptions acquired by age eighteen”. Or in the words of Bertrand Russell: “Common Sense embodies the metaphysics of savages.” Oh, and by the way: never trust people who quote great thinkers when they argue a point. It proves that they cannot rely on their own argumentation without the support of other thinkers. Makes ’em look daft. Oops!

And this is why everything you think you know is wrong.