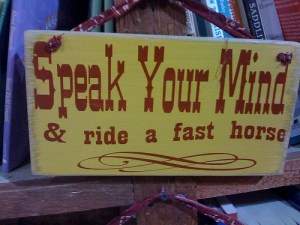 When ever entrepreneurs quote Henry Ford and his famed “faster horses” it can make my head spin and my blood boil. (If you are not familiar with it, the quote goes: “If I had asked people what they wanted, they would have said faster horses”, and Ford is supposed to have said this about him “inventing” the car.)

Now, the Ford quote is so popular in some circles that it is used in the form of an abbreviation, as in:

The quote is not seldom used to masquerade the fact that the “great vision” have yet to experience contact with a little place we call reality. If you’ve never been there, I can tell you that reality is a happy but rather weird place where customers live and prosper blissfully unaware of most entrepreneurial visions.

Let me illustrate: If Ford had actually asked people what they wanted they would probably eventually have said that they wanted to get from A to B faster. Potentially, the only way for a person who lacks Fords’ strength of vision to foresee how this goal could be attained, would indeed be to have “faster horses”. But it doesn’t take much scratching on the surface to understand that a real need was involved. The Ford quote is not absolution from listening to your customers or having some sort of relation with reality.

To sum up: If customers are to your company what fact checking is to a good story – well, then things need to change. Please don’t let your vision get in the way of creating/building/developing stuff that people actually want. Next question: Are they willing to part with their hard earned money to get their hands on your stuff? No? You didn’t think to ask? *sigh*