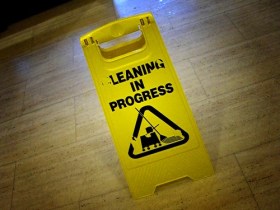 The field of Interaction Design has (rather) recently started to approach the Lean way of thinking, in the shape of a methodology called LeanUx. I welcome this, and it prompted me to write down a few words on the “expansion” of Lean into other areas.

As readers of this blog probably know, I find myself drawn to all things Lean and/or Agile. They appeal to me because they are methods based on pragmatic and realistic ideas about our limitations in relation to the challenges we face. These methods try to embrace the unknown as learning opportunities, instead of succumbing to guess work. Guessing can, in a worst case scenario, lead to a variation of “second order incompetence” (you don’t even know that you don’t know). The direct opposite of this can be found in the word of Socrates, who is credited with the quote:

“True knowledge exists in knowing that you know nothing.”

Now, why does Lean propose this? Because at the core lies an idea about eliminating waste. Lean considers…

…”the expenditure of resources for any goal other than the creation of value for the end customer to be wasteful, and thus a target for elimination.”

This means that Lean focuses on creating a process that ensure the creation of high customer value as efficiently as possible. This is done by finding and eliminating waste. In my (our?) world, this translates well to what is captured in this wonderful quote, for which I have no source:

Moving on: If you accept that you are in the business of creating something new, it follows that you are venturing into the unknown. That which is not known cannot be planned for in any meaningful way, since planning involves predicting the future – which is guessing. Sure, you can do it, but the risk that you invest a lot of time and money in the wrong guess (e.g: “waste”) is high, and probably not worth taking.  But you are still forced to relate to the unknown. One way to relate is to have a process with a focused effort to generate information by way of experimental work. To do this we start off with some assumptions, and when information has been generated, we revisit these assumptions and hope to validate them, or kill them off. This is what people talk about when they say things like “fail early, fail often” and the idea of “good enough” is also related.

So, basically, the Lean movement incarnations- be it just plain Lean, Lean Software Development, the Lean Startup or the most recent (I think) incarnation: LeanUX, all share the one same basic “idea” about the nature of our work.

The idea of design thinking in business comes to mind. In this fine book Roger Martin writes about how the exploration of the “mystery” is moved through “the funnel”, via iterative experimentation, towards the validated algorithm that can truly scale. This is one another way of illustrating the flow of work and ideas in a more holistic perspective. Only after a certain critical point can our efforts be turned in to “business as usual” and scale. I don’t have to tell you that that the point in time when you are ready to scale is also the point in time where you start to make money.

Even if this is a more “light weight” process compared to many others, actually doing it is quite difficult. Partly because it forces you to live with uncertainty, rather than living under the illusion that you have killed uncertainty with your Gant chart. The latter might give you a warm feeling in your tummy in the beginning of a process, as you role around in a mud-pile of assumptions and projections like a happy project manger piggy, but when you are closing in on your deadline and your assumptions turn out to be false, there is quite the price to pay for your initial delusion.

But the ideas found in Lean does not start nor stop with things defined as Lean. In my mind, Lean is but one expression of a general zeitgeist that exist well outside the Lean movement and these ideas resonate well with other areas of interest, in particular the wonderful world that is System Dynamics and Systems Thinking.

For some examples close to home, take Steve Krugs excellent books “Don’t make me think” and “Rocket Surgery Made Easy” or the Jakob Nielsen now famous “only test with five people” scaled down approach to usability testing. All calling to trim it down. It’s been a while since I read the books, but I cannot recall any of them calling what they propose “Lean”.

Another example from the opposite side: Take this fine book on Landing Page Optimisation by Tim Ash of sitetuners.com , which truly makes a science out of multivariate testing. On reading I was fascinated but I kept thinking “who in their right mind would spend all this time on that – it’s too complicated, too complex. Can the benefits really justify the effort?”  The very same thought crossed my mind when reading the also very good “About Face”. Truly the bible of Interaction Design. But the process that Alan Cooper and his friends suggest is simply too much. Who has the time, money and resources to do all that they propose in a world where the idea that you are investigating can be made obsolete in nano seconds by a change in some Apple-, Google- or Facebook- Terms of Use? Or what if the next truly disruptive game changer lies lurking behind the corner and makes your offer as interesting as, well, iTunes Ping. The good people at Cooper understands this though, hence this interesting post on LeanUx.

Admittedly, not all of us work at startups, but I can’t really see how it would be any different in a more established business. Developing a new product is a mini-startup. Sure many things come easier, (but not innovation – but that’s another blog post) but the general idea remains the same. The fast moving market doesn’t really care if you’re a startup or if you are established. You are competing on the same terms as far as the market is concerned.

Today’s truly valuable manager, be it executive-, project-, product- of otherwise is someone who understands the whole process on a systemic level: How to facilitate ideation, pushing the process of exploration through the funnel towards the scalable algorithm. How to operate a Lean Startup with a Lean Product Development Process where the LeanUX process is in place creating and validating mockups, ideas and designs in close collaboration with the designers and the developers – who all soldier on in an Agile/Kanban process. All components working together; maximising learning and the creation of information and eliminating as many forms of waste as possible.

That is a valuable skill. And it can be a lot of fun if you’re doing it with the right people. For this is an attitude towards work that requires a collection of very talented people who have their egos in check. It requires entrepreneurs who are open to reinventing themselves and their vision on a daily basis.

That makes it hard. But the rewards will be great if you can make it happen.

And yes, I know that there is a lot more to both Lean and Agile than brought up here, but I would call those aspects tools of the trade available to you once you have embraced the Lean mindset.

But here’s a question to you: Which areas will be next to receive a make over and earn the Lean label?

For the interested, a lot of fine literature on Lean and related subjects can be found in the Good Reads section