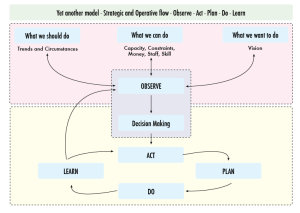 After roughly completing the “why a book” part where I tried to explain on a rudimentary level the why’s and how’s of this project, I now find myself staring rather blankly at a veritable mountain of unwritten words. I feel like how I imagine a very small mole at the base of Mount Everest might feel, if the mole in question had any aspirations towards climbing the damn thing. I’m not sure any mole has ever considered taking on such an endeavor, but if there is one I’d sure like to meet her. We could talk about our feelings. Compare notes. It would be grand.

After contemplating my predicament I now realize that my problem is that I was thinking chronologically, and for some reason got stuck in a mindset where I imagined myself crunching each chapter in the order I envisioned that they would appear in the book. This is a rookie mistake. A clear case of linear thinking, a practice which much of this book will be about saying sternly “no” to. It just goes to show how easy it is to have bad luck while thinking. There’s a lot of that floating about, and none of us are immune I guess.

So, a bit embarrassed I will dispense with sticking to narrative chronology, and dive right in to whatever is  on my mind at the moment. The “Our current state as it is” is currently on my mind, much because of the feedback I got from a reader. As it happens, the problem that the reader discussed is far from unsolvable. And as it happens I have a solution of sorts.

Now, moving on. Have you ever found yourself flashing a condescending smile towards a colleague who suggests an “impossible” approach towards solving a problem that you are stuck with? Ah, to be young and naive again, you think. And then you add:

“That’s just not how the world works”

What is this world you speak of, that doesn’t work as your more naive colleague suggest? Well, it’s your world, isn’t it?

The difference between you and your colleague in this scenario is that your colleague has yet begun to see the many – sometimes arbitrary and invisible – complex rules and regulations that exist in your world. So how can we see what’s going on? How can we see our world as it is? This is something that I would like to explore.

The good thing about talking about “system” instead of “world” is that when we talk in terms of “systems” it becomes just a little bit clearer to everyone that we are actually talking about something that is created. Not natural law. We create our own systems. And as such, we create our own worlds. Simultaneously, the systems we design are parts of larger systems, systems that we may or may not have any hand in creating. We are therefore very dependent on how other systems work. The capital E Economy, for instance, affects us all. That too, is a system of sorts.

If this wasn’t complex enough, we must add to this that in many cases the systems we find ourselves in  are completely undesigned. They have just emerged over the years, and no one is really responsible for how the system works. They are “just how the world works”, or the familiar “how we do things around here”.

And to add complexity to complexity, when we eventually realize this and get to the point where we actually start designing our systems, our choice of design is most certainly a consequence of how we see the world, not necessarily how the world in itself actually works – or could work – if only we had a little imagination. And I fear that in these areas, imagination is in short supply.

Interestingly, this is a realization that Buddhists thinkers have spent some 2500 years worrying about. We will return to that. For now, let’s just agree that the discrepancy between how we see things (and thus design systems) and the world as it actually is, causes quite a lot of problems.

This model then, is an attempt towards explaining how an holistic approach towards operating an organisation might look. It describes on a high level how we can get to the bottom of some of the issues that was brought up by the reader who was kind enough to get in touch. But first, let’s remind ourselves of what I wrote earlier regarding “The Model” that is meant to constitute the core of this book.

If we fail at understanding the world as it is, we will not excel at anything, as we will make decisions and land in conclusions regarding every other aspect of work, based on this flawed understanding.

As decisions are to be made, I suggest that the decision makers might do well to continuously observe the following:

What we can do
This means our current capacity to operate

What we want to do
This is our vision, or our desired state

In this model, we continuously and simultaneously both create and observe these aspects of our situation, using various methods and tools. We will get back to the tools later when we get into details.

The decision that is being made is in this model called an “act”, as in action. Deciding to act is where it all begins. What follows the decision to act, is a variant of the classic – yet strangely uncommonly used – PDCA-cycle.

And as the model demonstrates, the learning is fed back into the field of observation and decision making. And so we iterate.

You can see in the second image how this fits into a product development process, a process that I have described at some length here. 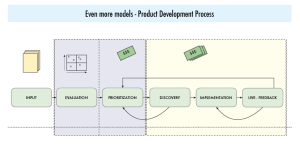 If you’re thinking that this closely resembles the Scientific Method, you’re absolutely right. The PDCA cycle, which we will return to later, often attributed to Shewhart and sometimes Deming, is based on just that.

As I read what I just wrote, I realize that I’m not making myself perfectly clear. And I apologize for that. I’m sure I’ll manage to make this crystal clear at some pint. I mean point.

Earlier posts on “Not Even Wrong”

5 thoughts on “Not Even Wrong: A few words on yet another model”