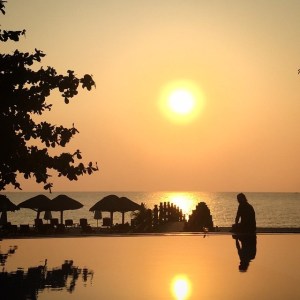 I have learned an important principle: simple things work, often to our dumbfounded surprise, for we tend to distrust the simple and strive for the complex.
– Richard Cracroft

noun sim·plic·i·ty \sim-ˈpli-sə-tē, -ˈplis-tē\
: the quality of being easy to understand or use
: the state or quality of being plain or not fancy or complicated
: something that is simple or ordinary but enjoyable

1:  the state of being simple, uncomplicated, or uncompounded
2a :  lack of subtlety or penetration :  innocence, naiveté
2b :  folly, silliness
3:  freedom from pretense or guile :  candor
4a :  directness of expression :  clarity
4b :  restraint in ornamentation :  austerity

On a rest stop somewhere between Di Linh and Saigon, the formidable sound of Vietnamese Punk Rock emanated from somewhere in the jungle. One might say that the hills were alive with the sound of music. It seemed that by some fortunate turn of events we were in hearing distance of a band practice. We couldn’t actually see the band, but the music conjured up powerful images in my mind.

Now, the guitarist knew his/her three power chords but seemed a bit unsure of in which order he/she was to place them. The bass player choose to play in the same key as the guitarist about 50 percent of the time, and the drummer banged the skins with an impressive disregard for such trivial things as consistency of BPM. The singer made up for not quite hitting his notes with bucketfuls of passion and energy. I don’t know what he was singing about, but he was impressively angry. Who know what demons he expelled? And who knows the target for his rage? A love affair gone sour? The parents, or the local teacher who just doesn’t “get it”? The police? The government? Or perhaps all of the above? Ah, but the lyrics don’t matter. It was beautiful. Just beautiful.

And it was beautiful because of – not despite – the  imperfections. The notion that only people who can sing/dance/paint/act should be allowed to do it, is perhaps one of the most annoying and soul sucking ideas ever. Usually, these ideas are promoted by people who actually can do all this stuff. The experts. We shall get back to them.

Now, a few nights earlier I found myself in a karaoke bar where a group of happy people challenged the concept of “only those who can should”. It was lots of fun. Also, the local lager Bia Saigon helped keep spirits high. Personally, I’m particularly happy about my radiant performance of Sinatras “New York, New York”, but I do feel I could have done better in my duet of “We are the World”. Having the karaoke machine display the lyrics properly would have helped. But to be fair, probably only just the little.

The Punk Rock movement is famous for its “Do It Yourself” (DIY) attitude – which is the very opposite of the “learned helplessness” we see a lot of in organizations where theory X style management still prevail. The DIY movement is all about mindset. “We can do this” is not only about positive thinking – it’s also about confidence, initiative, hard work and passion. And in order to get the ball rolling, the DIY people are well served by another famous acronym: Keep it Simple, Stupid (KISS).

Many startups have grown from such humble beginnings – and much like the Vietnamese Punk Rockers up in the hills north of Saigon, they decided to do it themselves and they kept it simple. Yet, as organizations grow and the seemingly inevitable bureaucratic layers are added, things start to change. In comes complicatedness, and out goes passion, individual initiative and the life affirming mindset that perfection is boring.

So, one of the many wonderful aspects of simplicity is that it lowers barriers for entry. Making things complicated excludes people from joining in. It makes sure that we need experts. It follows that experts have very rational reasons for complicating things to the extent where their expertise is needed. This is a trap. Note my choice of words “making things complicated”. Yes, we tend to make things complicated, and so I posit that they aren’t necessarily very complicated “as is”. Granted, complicatedness is a hard concept to pin down – as it’s pretty much a sliding scale all in the eye of the beholder.

We have a few sure fire ways of accomplishing this “complicatedness” in our every day interactions. Language for instance, is one great way of excluding people. Every domain has its own jargon, and mastering this jargon provides the keys. Know the jargon and you’re allowed to join the fun. Being an avid reader and having spent an unreasonable time at university makes me as guilty of this as anyone. But I strive to keep it to a minimum.

When it comes to making things complicated, we are our own worst enemies. Consider simplicity in thought. A  whole branch of therapy has seen the light of day catering to the need that arises because we as humans tend to complicate our thoughts so much that we need help to make them less complicated. When our heads spin we construct these whole worlds where we make (often) faulty assumptions about ourselves, and people’s motives and thought. About how the world is.

Consider coaching. The most powerful questions are extremely simple.
– How do you feel about that?
– What makes you believe that?
– What about that is important to you?
– What would be better?

And, to adress the organizational perspective, I will end with a quote from an earlier post:

“In the interest of extreme simplicity: What exist, always, is a pile of money, a pile of people, and a pile of desired outcomes, framed as questions that seek answers. Anything injected into this reality that disrupts the simplicity in the shape of cost centers, bureaucracy, hierarchies, structures and silos have to fight to deserve their place in this world. They have to demonstrate how they help us reach our vision, or find themselves removed. The burden of proof needs to be reversed.”

One thought on “Not Even Wrong – On Simplicity”