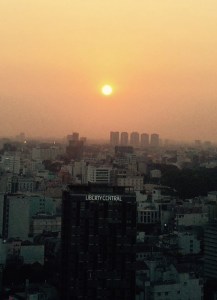 The sun going down over Saigon

“A system is a network of interdependent components that work together to try to accomplish the aim of the system…The secret is cooperation between components toward the aim of the organization. We cannot afford the destructive effect of competition.”

I’m sitting in the rooftop bar on the 23:d floor of the Saigon Sheraton watching the sun set. A small copper-green lizard is hanging out on a wall nearby, curiously watching me down a Bloody Mary. I thought it a fitting drink for the occasion. I’d like to think my lizard friend agrees, and that those looks she’s giving me is of the approving kind. Having small lizards look at you disapprovingly would simply be too weird. We want none of that at this part of our journey.

As the sun sets and the neon signs of the Saigon skyline starts to light up, I perform one of my many audacious acts of pretention and contemplate the nature of systems, change and flow.

Several floors down we find the noisy, seemingly chaotic hustle that is Saigon traffic. Allegedly, no less than six million motor bikes roam these streets. Yet somehow, strangely – in a relative sense of course – traffic flows.

So as it happens Saigon traffic is not chaotic at all, it’s merely complex. How is it then that traffic flows in Saigon, despite the overwhelming intensity? I have a few suggestions:

You see, even though some of the initiatives that we can observe in Saigon traffic are quite frankly very severely against the rules, they are still not “bad” for the system. Quite the contrary. As long as agents in the system can intelligently adapt their behavior in accordance (or in coherence) with what is happening, these “rule breakers” actually help the system navigate around obstacles that occur, and together they create emergent paths that I think are vital to the survival of the system as a whole.

Another way to look at this situation is to reverse it. Consider the phenomenon “work-to-rule. It can roughly be described as a form of strike or protest, where workers adhere strictly to every single rule, policy and dictated process step in the manual. The result is a deliberate slow down where just about nothing gets done, yet the workers have done nothing wrong – they just follow the rules as dictated by the management.

This just goes to show that rule breaking is absolutely necessary for a system to function. The question is: to what degree, and what forces or aspects of the system influence the necessary degree? We will find reason to get back to this at more depth further on. For now, suffice it to say: Everyone moving along using their own personal judgement, makes for a better situation and a better outcome than strict rules that removes the need for personal judgement. This is true in traffic, and it is true in organizations.

Rules, regulations, policy, process and established practice can never anticipate or predict enough of the several wondrous combinations of weirdness that can occur in this here complex world of ours. This is why  we need to understand the nature of rules and what effect they have on the system. And this is why we’re interested in keeping our rules flexible with room for maneuver.

1. Using inclusive tactics: define a general direction for your system.
2. Make sure everyone has the freedom to exercise agency and personal judgement in coherence with the general direction, and in coherence with the “spirit” of any rule or policy.
3. Look for places in the system where collaboration happens in a good way. Find ways to acknowledge and amplify collaborative behavior.
4. Look for places where collaboration is supposed to happen but is avoided, or happens but breaks down. Explore why individual agents or groups refuse to collaborate or collaborate poorly. Expect the cause to be systemic.
5. Find your “positive rule breakers” and find ways to acknowledge and amplify positive rule breaking behavior.

2 thoughts on “Not Even Wrong – Saigon traffic and CAS”