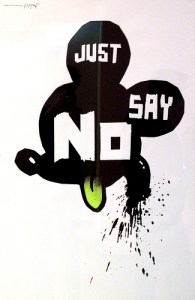 We all know about the early adaptors, you know, the people who jump on new trends almost instantly. Apparently the term was originally coined by Everett M. Rogers in his book Diffusion of Innovations from 1962. Other people have built on the idea including such notables as Moore in his book Crossing the Chasm and of course Seth Godin in Purple Cow. It is a useful term for people who know how to make sense of it. It involves product design, innovation and marketing. Interestingly, it is of course also possible to be an early rejector, a stance that holds considerably less value for everyone except the rejector.

Here’s how you play the game: When a new product or service like the iPad, or Google Buzz comes along you can make yourself interesting at dinner parties (or on Twitter) by simply choosing sides: reject or adopt. It’s a rather safe gamble. You’ve got a sweet 50 / 50 chance that you’ll turn out appearing awesome, finding yourself in the attractive position of saying “It’s great, I’ve been using it for ages” or “It’s crap, and I told you so from the get go”. Should your rejection turn out to be wrong all you risk is the quickly forgotten humiliation of getting a Twitter account way later than anyone else.

But you have to be really early these days, it’s a tight race. After all, how early is early? If you want your time in the sun looking like a trend guru, your judgement must be almost instant, which means you’ll have little time to think your opinion through, check out facts and take all the other necessary steps I’d expect anyone to take before voicing an opinion about anything.

So by all means: don’t think, flip the coin and go for gold. But remember that since new information on the subject will emerge continuously, and the things about the new stuff which you decide to hate will be fixed, changed or discarded within days, the value of what you are saying approaches zero faster than you can say antidisestablishmentarianism .

But, I hear you say, these protestors make change happen by pointing out flaws. Maybe so, maybe so…

But this pressure towards instant reaction that some people succumb to is interesting in times when all signs point towards a world of real-time everything, and this in turn will force us to discuss what I would call your “zoom level on reality”. I will return to this in a post later on.