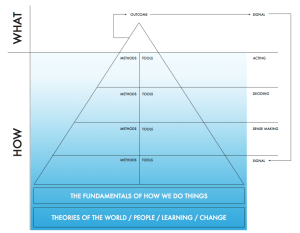 So then, this is the model that I hope capture the essence of the message that I would like to invite you to consider. This then, is the entire skeleton of the book I hope to write.

As avid readers of this blog might observe, the earliest illustration of what I want to say is now placed at the foundation of this “Ice Berg” model. This foundation, we might call it “Theory”, is the core from which everything else flows. These theories – whatever they might be – that we have about the nature of the world, people, change and learning – end up here. They are of the utmost importance, as they inform everything else that follows. These theories constitute the building block of the organisation, and in a sense – the success or failure of everything that we do can be traced back to this foundation.

What follows after this foundation is a second platform – which contains what I call “The fundamentals of How we do things” – here we’ll find how the theories we’ve outlined about the world influence HOW we do work – i.e the consequences that our theoretical foundation has for our “How”. In simpler words, this platform is the total sum of all the “IF this THEN what?” – that you will find throughout the book.

Following the foundations is a very high level process description outlining the “steps” necessary in order for us to move from picking up a signal, making sense of that signal, taking an initiative (making a change), achieving an outcome and then picking up new signals as our environment responds to the change we’ve introduced. Each step is subsequently divided into “Methods” and “Tools” – and examples of such methods and tools will be added at a later date.

Now, the first important thing to remember is that the two platforms on which these steps rest influence the outcome of using these methods and tools – as the foundations dictate how we collaborate, i.e: how we think, speak, listen and learn.

I’ve chosen the old and rather worn Ice Berg model because I think it’s a good metaphor that clearly illustrates how much there is going on before we reach above the waterline – where we find the question of “WHAT”. Everything beneath the waterline is a question of “HOW”. I do hope that this can be an eye opener for some.

Another change I’ve made worth pointing out: In earlier writings I expanded the Poppendieck idea of “from concept to cash” to “from signal to cash” – and now I have moved towards a model which covers “from signal to signal” – as I’ve come to the (in hindsight rather obvious) conclusion that “cash” is best considered a signal, rather than an end game. I also feel happy about how this clearly demonstrates that we’re talking about a continuous loop, rather than something as linear as “start – finish”. This was of course always the case, and so I do beat myself up a tad for not seeing how my own model misrepresented my own thoughts until now. But never mind that now.

It is my hope that this can serve as a rather generic framework for diagnosing work. It opens up for other theories than my own about the order of things, and so other methods and tools can flow through the process if you make other conclusions about the order of things than I do, yet no matter which theories you espouse, the model somehow encourage visibility as well as  coherency. I’m quite happy about that.

And so finally, I guess I can say with some confidence, that all that is left to do now, is write the book. No biggie!