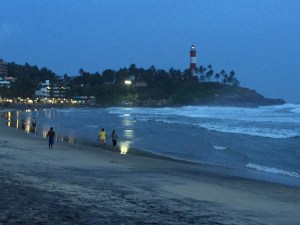 After a week of work in busy Bangalore I decided to head down to Kerala for some relaxation and writing. I checked in at the Turtle on the Beach Hotel in Kovalum, a few miles west of Kanyakumari, the southernmost point of peninsular India. With the waves from the Arabian sea crashing against the rocks and the lighthouse of “Lighthouse beach” fame looking rather impressive in the distance, I’d say I have just about everything I need for a good time. I also have a new friend called Biplab.

Now, I’m sure we can all agree that Biplab is – phonetically speaking – a world class name. But there’s more to this name than the beauty of its phonetics. You see, Biplabs father was a devout Marxist, so he decided to name his son “revolution”. Yes. The name Biplab actually means “revolution”.

– That’s a pretty awesome name you’ve got there, I told Biplab. Biplab just nodded. He knew.

As this is a dry hotel in a rather dry area – alcohol is cumbersome to come by. I had to enlist the assistance of Babu, a friendly and very curios autorikshaw driver. Babu guided me to the shady liqueur store down by Kovalum Junction and helped me get hold of the stuff I needed. For medicinal purposes, obviously. My friend Biplab has been instrumental in fixing me up with buckets of ice and slices of lemon and lime.

So now I’m sitting on my balcony with my drink, looking out over the beach, trying to get my writing on.

Recently, I’ve had both good reason and opportunity to dive deeper into the questions of “cross cultural management”. An organisation with employees representing several nationalities must of course be mindful of the challenges associated with a multitude of cultural perspectives. I’ve taken great care not to be one of those who too easily interpret workplace difficulties as culture related. I’ve seen such tendencies. It’s easy to lump everything together and label it “culture”, when a number of other explanations might serve us better. Nevertheless, it can be a challenge.

Now, I’ve chosen to base my approach towards the understanding of cultural differences on Erin Meyer’s “The Culture Map”. The Culture Map is based on surveys across industries, across the world, and form an admittedly rather stereotypical image of cultures. Since the author is well aware of this, as well as the fact that individual personalities have a significant impact on behaviour and outlook, I do feel that the research is sound, as far as it goes.

My initial findings is that the culture of engineering and the subset of that culture – the culture of digital startups – seem to be a much more powerful indicator of behaviour and attitudes than anything else. Such were my feelings back home in Stockholm, and the fine people I worked with down here in Bangalore made pretty much the same observations.

When we talked our way through the description of India vs Sweden in Erin Meyer’s “Culture Map”, my Bangalore friends expressed the feeling that, yes the map is rather accurate, but still somehow not “applicable to them”. In their experience, many of the things that are stereotypically “true” about Indian work culture, is simply overridden by “engineering”.

The question becomes: If “engineering” and “digital startup” are such strong cultures, are we not getting the much lauded benefits of cultural diversity? Something to think about.